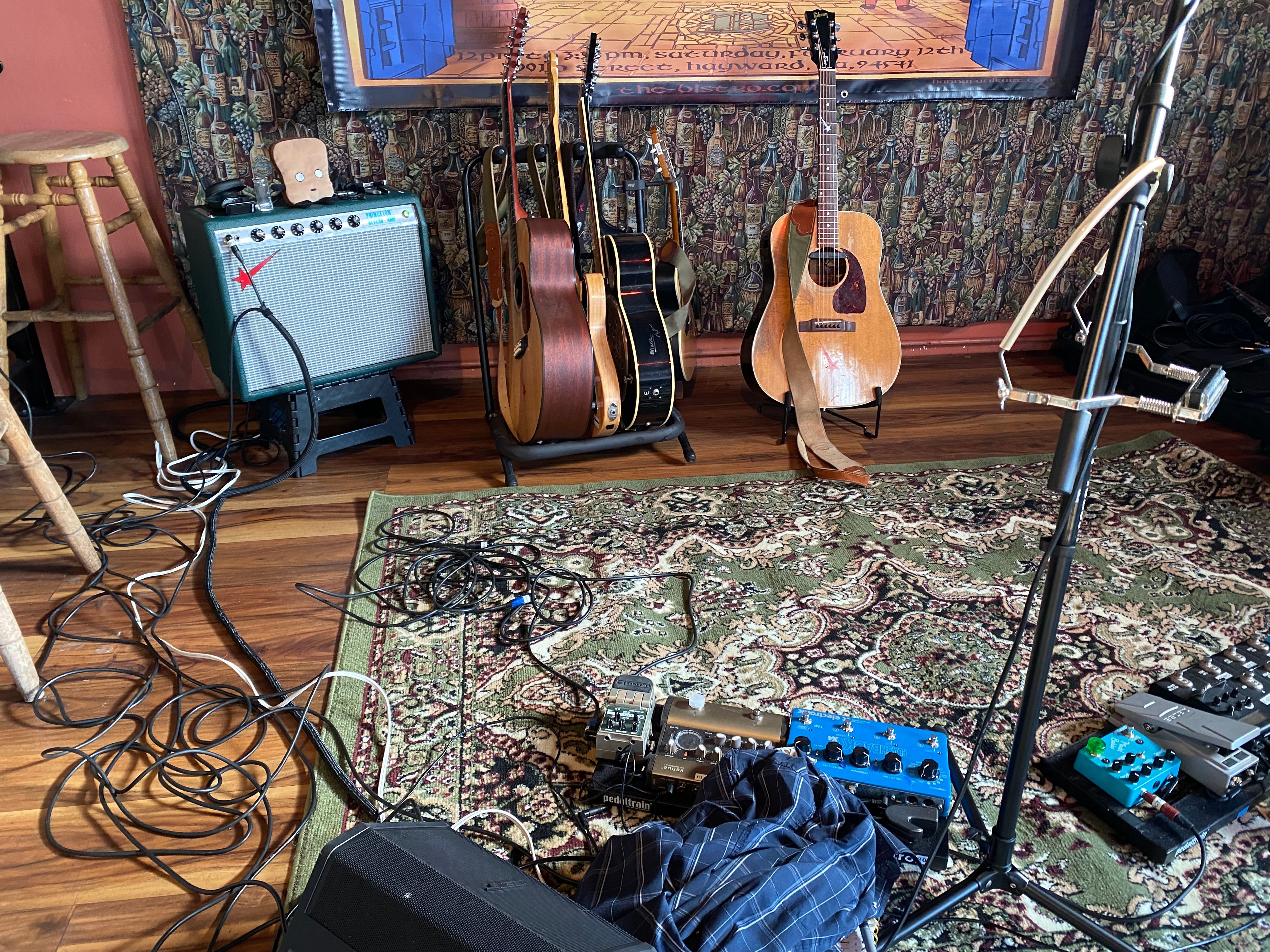 The Hamlet Inn in Solvang is nice and centrally located little motel that allows you to wake up and walk across the street and sit at a diner counter and get your bacon and eggs. I love diners. If I had my druthers I think our kitchen at home would be all Formica and chrome and the formica would have the little sparkly stars in the design* and a covered pie would sit on the counter.

The drive from Solvang to Hayward is pretty smooth. It’s just under 300 miles and about 5 hours. I go from car to directly setting up on stage since I’m playing from 4:30-6:30 today.

The Bistro in Hayward is a music bar. No tvs to distract. Just a stage, a long bar along the right and a bunch of tables in the middle. There is a couple at the end of the bar having an animated conversation about the whereabouts and goings on about all the people they graduated high school with back in the early 70s. “You remember that teacher, she was the one that was always nice to boys but mean to the girls.” “No, I don’t think I had her.” “Of course you had her, we were in the same class.”  And so on and so on.

Now The Bistro is an interesting name because there is nothing distinctly “bistro” about this place. There is no food as far as I can tell, just some hard drinking Friday afternoon folks. The bartender is super nice and has two braids that start on either side of his mouth and go down nearly to his belt. If the long braided beard would make you bristle, his demeanor and friendly smile would break down any visual prejudices you might have.

There are large windows all round this bar and allows full visual of the street outside and it feels very open and inviting.

I roll out my rug on the hardwood stage and set up for some afternoon singing and strumming.

For the technical aspects: It’s a Peavey PA head and speakers hung from the ceiling. I know some folks don’t like Peavey stuff, notably Ray Wylie Hubbard has it in his rider that he won’t play through any Peavey PA systems. (I don’t know what happened to Ray to make it a tour rider breaking point but I am curious) But I’m putting a vocal and acoustic guitar through it and honestly, it’s hard for Peavey to muck that up. I run the two cables, turn it up and it’s fine. Easy even. I take a line out from the monitor send and plug it into my portable Bose as a monitor and I’m sorted. I think the rug helps too and I’m not joking about that.

Before I start I tell the folks there that I’m not sure what they are expecting but I play mostly songs I’ve written and not a lot of covers and the covers I do play are not always identifiable as covers. To which someone shouts out “That’s good!” And everyone else sort of agrees with that proclamation.

And its these little things, these setting of expectations and their being willing to go along with me that change the air in the room. Before I said that I was thinking to myself “I’m going to get requests for ‘American pie’ and the Eagles today.” And them being up for what I was about to dish out - that was 90% of the battle. It was easy after that.

The one weird thing that did happen was when the evening’s band showed up to start setting up. The guitar player we’ll call “Brad” was there 2 hours early to set up for their gig. Brad is about 10 years older than me and seems hell bent on one-upping everything. It’s weird. He tells me his band will pack the place tonight and how he’s been playing in a Santana cover band since the 70s and then he starts with guitars as he has a custom made guitar and he takes it out to show me and Rick from the bar is there listening and Brad is ignoring my new friend Rick and I keep bring Rick back into the conversation. Rick asks to hold his custom made guitar and it is a beautiful piece of craftsmanship. 7 piece neck, custom wound pickups, really beautiful. And Rick chimes in “Bobbo used to make guitars.”*** And I’m about to put away my telecaster and I say, I put this one together. Rick asks if he can hold it, I hand it over. And god bless him, Rick looks right at Brad and says “I like this one better than yours.” And it’s just funny to watch. I’m not here to impress the guitar player of a Santana tribute band, I’m here to entertain the folks at the bar.

Rick asks me a few more questions about touring in the states and Europe and it’s just friendly conversation. Brad overhears this and chimes in about how his wife and daughter are going to europe for about two weeks and asks me how long I will be overseas. I tell him I usually go for about 6-8 weeks at a time. “My god, what are you doing all that time?” Rick chimes in “He’s on tour, playing shows.” And Brad’s face melts again. It’s so weird to watch someone who usually wins the one-up game losing it - and I’m not even playing the game!

Then Brad starts talking about his guitar collection and how he has like a dozen guitars and asks me how many I have. “I really don’t know man. I sold like 4 of them in the past couple months so probably around 40?” His face just melts again. I think he’s used to winning this game.

During the show it was also great to see Rory who I haven’t seen since…Hotel Utah in San Francisco or maybe it was a house concert in Berkeley. He’s friends of friends and is now also my friend. We get to catch up and commiserate on lost loved ones and we share a good hug and chat. Thanks Rory, it’s alwasy great to see you!

It’s a short 45 minute post show drive to Suzi’s and I sleep deep tonight. Tomorrow is a matinee show at 2 pm that’s only about 40 minutes away.

*Would it be wrong to want Tracy to dress as a diner waitress too? That may be a bridge too far.
**We were on a first name basis at this point.
***Somehow the story that I used to work at Parker guitars actually came out during the show’s impromptu Q&A period.