As NRBQ would say “I got my HoJo working!” Yep, stayed at a Howard Johnson’s last night. I didn’t know they still existed either! Was alright, I give it a solid 2 stars. They had wifi but it only worked in the hallway but the bed was comfy and clean and that’s all I really needed. Tomorrow I’m driving to Tacoma, dropping stuff, meeting some friends and then playing a show in Seattle.

Driving into Tacoma I’m experiencing weird no connection to wifi. I pull into a McDonalds and try to get signal but it doesn’t come. I can see on the map where I have to go and so I just old fashioned/no gps it. This far north and west it feels like Lewis an Clark to be here with no gps.*

Meeting up with Jeff and Frances and the house is super nice, Harvey the dog is a big black lab. We have a nice meet up/catch up. Her ex husband used to work at the U.N. In the Netherlands and she lived in Germany and just really interesting conversation then I head out to be at Central Saloon for load in.

It’s an easy drive from Tacoma to Seattle but the roads are a disaster, multiple sets of lines make you wonder if you’re on the sidewalk, in the street, in a turn lane or on the 5. Jeff tells me that it’s Seattle’s version of Boston’s “Big Dig” and they’re still figuring it out. I came to a full stop twice because I couldn’t tell which way the road went.

The Central Saloon is famous. For starters they’ve been here for over 100 years but then you look at the walls of the bands that have played here - Mother Love Bone, Nirvana, Soundgarden, Screaming Trees - just to name a few. Without those bands you don’t have Seattle “grunge”. For a Boston perspective; it’s built like Bill’s Bar on Landsdowne street. Same type of stage, same long narrow building, same workmanlike area and same rock and roll vibe.

I feel at home.

There’s two other acts going on before me and they are both great. There’s Peter Donovan and Sean Croizier. Sean is up first and he’s got a great voice that is only made better when he’s joined by Erica and dammit I can’t remember the mandolin player’s name! When the three of them sing together it’s really something special. Tight harmonies and cool songs. And then Peter Donovan unassumingly takes the stage and just slays with beautiful songs and an easy delivery that pisses me off he’s so smooth. He’s got a new album coming out next month and I’m already in line to get it.

I like this stage. It’s up a bit higher than most and feels very comfortable. I tell stories and sing the songs. I dedicate APB to Erica sitting in front grooving along and we get the sing along going without even teaching it. I’m feeling so comfortable I even play my looper version of “reptile” by The Church. What the hell, right? It goes over even though I screw up some lyrics. I’m feeling the vocals a bit rough tonight but it seems to be work in this place. I finish up with Angelia and then I go make toast for everyone.

The manager/booking guy comes up to me and says “that was fucking awesome, any time you want to come back, just let me know.” That’s my kind of compliment! Loved this place and can’t wait to return.

All the musicians hung out for one another and supported each other’s sets. I sold 4 or 5 vinyl records tonight and some cds. Was a great night.

I have definitely decided that next tour will be fewer guitars but I think I have to keep bringing the little amp and doing the dual pickup setup. I’m the only one doing this thing and it seems to be going over pretty well. I get more compliments from folks saying they dig the sound and tonight I get compared to not just Tom Petty but also Frank Black. That’s a first. When I’m in a place that is ok to be loud, I can make a good bit of noise for dynamic purposes and it feels good.

Back at Francis’ house we open some wine and cheese and have more hangout time. The stories get even more fantastical and the world continues to be a crazy place.

After my second glass of wine I realize that the only thing I’ve eaten in the past 10 hours is a pretzel and a piece of toast. I’m barely awake when my head hits the pillow.

Tomorrow I drive to Sherwood, OR where my aunt and uncle live. I’m looking forward to seeing them as it’s been a few years since we’ve been together. 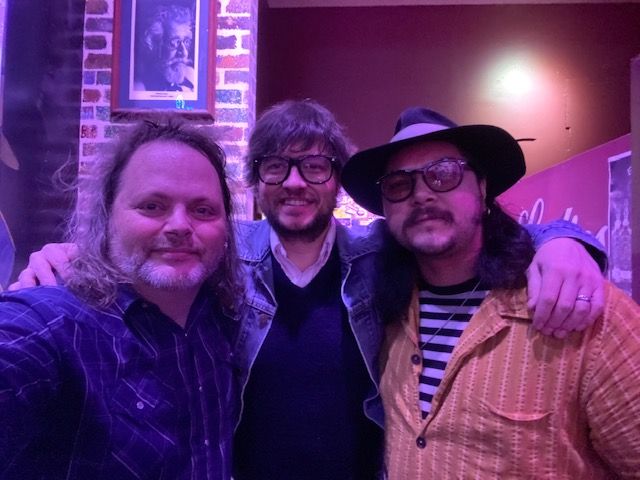